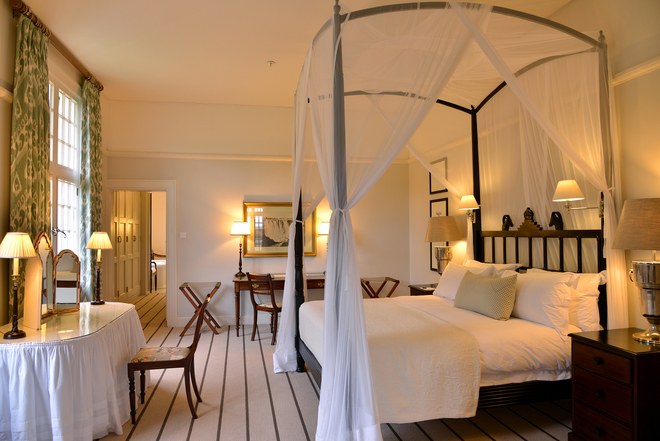 The vast game parks of Africa have a powerful place in our collective imagination. Even those of us who have never set foot on the continent can name its most famous conservation areas—the Maasai Mara, the Serengeti, the Kruger, and Etosha are all evocative of the extraordinary experiences Africa has to offer.

But Hwange, Zimbabwe’s biggest and most diverse national park, is rarely included in that impressive list. This is in spite of the fact that the country is dominated by two iconic rivers, endless bushland, the world’s most famous waterfall, and some of the best game viewing on the continent.

The political devastation of the recent past is, of course, the reason why. But as Robert Mugabe ages, there is a sense of renewed hope for a country that was once known as the bread basket of Africa and which the BBC’s former South Africa correspondent, Fergal Keane, describes as “possibly the most beautiful place in all of Africa.”

Like thousands before him, he was drawn in by the potent mix of thundering waterfalls, sea-like lakes, and animal-filled plains. A tougher, more extravagant version of neighboring Botswana and its gentle Okavango Delta waterways, Zimbabwe smacks you in the face with its dramatic scenery, its endless hot and dusty savannas, and its world record–breaking array of wildlife.

Hwange National Park in particular gives you a taste of what game viewing was like before modern tourism sanitized it with tagged animals, radio call-outs, and seven jeeps crowded around one overwhelmed leopard. Hwange is simply too full of animals and too empty of people to play that game.

At 5,657 square miles, it is 18 times the size of New York City, and in that space, it has an estimated 50,000 elephants, many of which are in breeding herds as large as 300 that pad from waterhole to waterhole. There are also more than 100 different kinds of mammals and an estimated 500 bird species living in the scrubland. This level of biodiversity is matched only by the Serengeti in Tanzania and the Kruger National Park in South Africa, both of which have a far higher population of human visitors than Hwange.

Which means that in the glamorous bush camps that are dotted around the park, you should always be alone with your guide and, hopefully, a pride of sleepy lions or a solitary cheetah. Although, if you get taken to the extraordinary Nyamandlovu pan, it isn’t uncommon to see buffalos, giraffes, elephants, baboons, and even a few big cats in one rather overwhelming sighting.

And the camps themselves are world-class. Wilderness Safaris has played an important role in the rejuvenation of Hwange, and its three camps in the park rival any of the award-winning establishments in neighboring South Africa and Botswana. But most importantly, visiting Zimbabwe is an important way to help control the devastating poaching figures. This is a particularly pressing time for the African conservation community. Poaching is rife throughout the continent but Mugabe’s corrupt rule has made it particularly prolific in Zimbabwe, where a high price is placed on wild animals with commercial value. And unlike neighbouring countries such as South Africa, Zimbabwe has no state-funded anti-poaching projects, meaning parks are entirely reliant on money brought in by tourists. Organizations such as Wilderness Safaris are too late for the rhino population (which now no longer exists in the wild in Zimbabwe), but are protecting lions, elephants, and cheetahs at an astounding rate, thanks to the generosity of guests.

And conservationists are hoping their efforts are only set to get stronger thanks to the government’s latest push to increase tourism numbers. Hwange is 100 miles (or a short propeller-plane hop) away from the brand-new Victoria Falls Airport, which currently welcomes daily flights from Dubai, Doha, Johannesburg, and many other cities around Africa, with the aim of opening up this alluring part of Zimbabwe to the world. It also means visitors can easily combine a trip to the unmissable Victoria Falls with a few days in Hwange.

And while it will take years for the scars of the past to heal, the international travel industry’s attention—which has been very much trained on Zimbabwe for the last year—has given a wonderful sense of hope to the people of Hwange National Park in particular. And many of them speak about how visitors to their extraordinary country hold the key to not only saving animal lives, but also to ushering in a new era for Zimbabwe.

Little MakaloloIf you’re hoping to get intimate with your surroundings, then look no further than Little Mak, as it is affectionately called. Sleeping just 12 people, you may well find yourself alone in the camp in one of just six beautifully decorated tents that feel like the most comfortable bush home in the world, rather than a luxury camp. There’s also a small plunge pool and a shabby-chic boma in which to have drinks under the stars.

Davison’sSet around one of the biggest waterholes in Hwange, it is tempting to pass your days at Davison’s doing little more than lounging on either your wonderfully comfortable bed, the newly decorated central area, or simply in the coolness of the pool so you can watch the herds of elephant and buffalo, the troops of baboon, and the occasional big cat pad in and out for a much-needed drink.

LinkwashaThe most glamorous and high-tech of all the Hwange camps, Linkwasha somehow combines the amenities of a five-star hotel in New York with the muted tones of a chic establishment in Paris—oh, and views of a savanna populated with kudu, zebra, giraffe, and ground hornbill. If you can, request a guide called Livingstone Sana, a brilliant old safari hand who has lived in Hwange for decades and knows everything there is to possibly know about bush life.

The Victoria Falls HotelThe grande dame of African colonial-era hotels, this regal property sits on a manicured lawn a 15-minute walk away from the most dramatic waterfall on earth. And with four-posters draped in mosquito nets; old-fashioned claw-foot baths; a long, shaded swimming pool; and a deep veranda made for sipping gin and tonics, it also fulfills every travel fantasy you’ve ever had in one stop.